First of all, if you’re reading this because you thought it said the Revenant I would just like to inform you this is not a review of the movie Leonardo DiCaprio won an Oscar with. This is a review of the book The Remnant by Clare McIvor. I can’t speak for the film considering I’ve never seen it, so let me talk about this book of a similar title.

The Remnant is a Christian, dystopian-esque novel that follows the outlawed, underground church that calls themselves the Remnant. Most of the band of believers hide secretly under Shakespeare House where they train seers and prophets, but some of them risk their lives above ground as they convert people to their cause. Our story focuses on Hunter Rhodes, the only son of the Remnant leader, and his group of fellow Christians as they fight for the survival of the gospel.

Remnant is an action packed tale of the church, persecution, the spiritual realm, and how believers can stand up and fight in the midst of it all.

The most interesting thing about this novel that really sets it apart is the unique perspective. Although Hunter is the main character, he is not the narrator. An angel is. Because of this, the reader is given insight into things that the characters themselves are not always aware of. Spiritual warfare is one of the main themes in this book, and with the help of the angel as narrator, we can see how supernatural forces shape the events that occur. Demons threaten to thwart plans, angels come to the rescue, and there are battles unseen by the Remnant. The whole dynamic changes when you’re aware of these beings and the effect they have.

One of the most prominent supernatural beings is called the Muse. He was, to me, the most fascinating thing about the story. He’s a demon that whispers to Lady Babylonia, who fancies herself a psychic. With the help of the Muse, she is able to tell the future to her clients. This demon uses and manipulates everyone around him, and his presence in the story gives it a darker edge, which I personally love.

There’s some politics involved that remind me a lot of The Hunger Games. (Which doesn’t really say much. All books in this genre sound like THG to me.) But there are striking similarities in how the Presidents in each book respond to perceived threats. Saul Raymond, one of the 4 presidents of the world, operates on publicity and fame. He uses his daughter as an icon to sway crowds, as well as manipulates her love life to meet his own agenda. That plot point mirrors well with Katniss and Peeta in THG. However, Saul isn’t really in charge, and we get to see that his crutch is his devotion to Lady Babylonia and her Muse.

Then there’s Hunter and the Remnant. I really liked Hunter as a protagonist because while he’s the son of the leader of the Remnant, he has doubts. It’s made very clear he sees himself as an outcast, even among friends. He likes it, in a messed up way, which I think a lot of people can relate to. I know I did. He enjoys being in rebellion, even though its not what God wants. He struggles with his faith, with his anger issues, and with his need to be different. He doesn’t think of himself as the hero, which is why God chooses him to be one, despite his obvious dark side.

Hunter isn’t the only one who has faults either. In fact, the entire Remnant seems to be a flawed rebellion. While Christ has called them to share the gospel and be brave, they have spent years hiding away underground thinking only of their own self preservation. This is pointed out when one character remarks, “The Remnant have been too scared of their own mortality and reputation to share their eternal truth with a world that desperately needs them to.” I love that McIvor wasn’t afraid to go there in her writing. To openly acknowledge the flaws in this church is bold and yet necessary. Because Christ followers aren’t perfect. I think a lot of Christian novels make believers out to be these Always Faithful, Always Loving type people and completely miss the fact that we are sinners (present tense.) saved by grace. Remnant, on the other hand, stays true to that idea.

As a whole, I enjoyed the book. It’s not my normal cup of tea, but I really liked the concept of spiritual warfare in it and couldn’t pass up the opportunity to read and review this book. It had it’s flaws; sometimes cheesy dialogue and a few typos; but its significantly better than almost all the Christian books out today. Clare McIvor embraces the reality of spiritual warfare, which can be really taboo in some churches. Personally, I don’t think enough people are aware (or even believe in) spiritual beings that have such a major effect on our world. McIvor takes a dystopian world and brings it to hit home. There are so many takeaways in that novel, but if I had to isolate one overarching theme, it would be perseverance of the saints. No matter what you’re going through, you have more resources than you know of. Your prayers are heard and they do make a difference, even if you can’t see it.

I think Hunter Rhodes sums it up best himself. “Sometimes faith is a feeling, but the rest of the time it’s something you choose to do.” 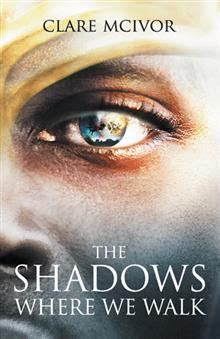 Now for the giveaway portion…
I was so excited to have gotten to be in contact with the author of this great book, and now I have the chance to do my first ever blog giveaway! I will be giving away a code for an ebook of Clare McIvors debut novel, The Shadows Where We Walk. I haven’t read it yet but I plan to over the summer. But now you can help support a growing Christian author and my weird little place on the Internet by entering this giveaway. There are a lot of ways to enter, so may the odds be ever in your favor.

5 thoughts on “The Remnant Review + Giveaway”