My NYE was amazing. I went to a hotel with two of my friends and we partied. (And by party I mean we watched movies and drank sparkling grape juice out of wine glasses and listened to Justin Bieber and sat on the hotel bed in our pjs and talked.) I loved it. But now I want to talk about the books I read in 2015.

I read 72 books, which is a personal record for me. I’m proud because this was the year I started college and told myself I wasn’t going to read a lot. So I want to give you my top favorites or most notable books I read last year. I think I read more non-fiction this year than fiction, which is sort of weird, but I really like memoirs and autobiographies. I love hearing people’s stories and in a way, I feel like I owe it to people to listen. I feel the need to read every autobiography ever, even though I know it’s not even a semi realistic goal. So I just try to read as many of them as I can.

The first list will be fiction, and the second will be autobiographies. Let me know what you think of them!

All The Bright Places – Jennifer Niven
Finn and Violet both planned on jumping off the roof of their school on the same day. They did not plan this. Finn is a freak. Violet is the popular girl. Yet it’s Finn who talks Violet down. Although he lets her tell the school that she went up their to save him, the truth continues to haunt her.
This unlikely duo end up doing a school project together, at Finn’s insistence, and neither one of them are prepared for what awaits them.

This book was amazing. Probably one of my favorites ever. So beautifully written and it discussed so many important topics. And I know the author knew what she was talking about. (From the authors note at the end.) It’s so relevant and relateable and the characters will melt your heart. Please read this book. 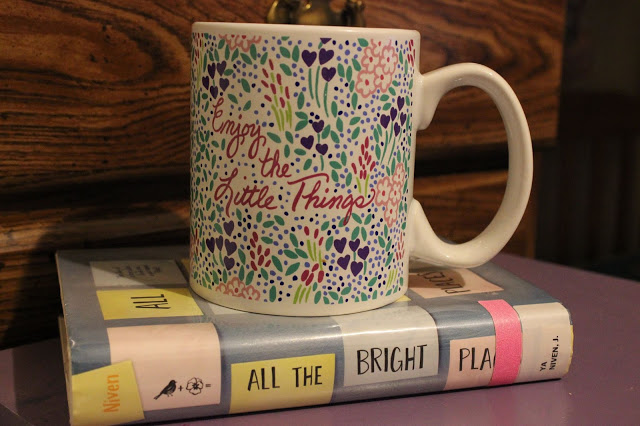 Challenger Deep – Neal Shusterman
Caden Bosch is on a boat going to Challenger Deep, the deepest place on the planet. Beyond that, good luck trying to figure this book out because I am at a loss as to how to explain it.

This book utterly wrecked me. (Shipwreck pun intended.) At first I was skeptical because if you read the description you just kinda scratch your head at it. But Aimee and Ely both thought it was just beyond fantastic, so I had to read it because I trust their judgement above everyone else’s. (True fact.) I stuck it out to the end and it blew my mind. It’s confusing at first but press through it. This book did not disappoint.

The Lord Of The Flies – William Golding
Boys get stuck on an island and have to find out a way to survive while they wait for help to arrive. Ralph is elected leader, but when some of the young boys begin to have nightmares, they begin to think a monster is hiding on the island. Driven by fear and blood-lust, the boys group splits in two; each side at war with the other. Will the boys be able to come to a peace agreement, or will the monster destroy them before they ever get the chance to make things right?

I don’t know why people complain about required reading in schools so much. In my opinion, the books are actually amazing. Point number one would be this book right here. The themes are so deep and rich, the symbolism is so well thought out, and the things you learn will shake you right to your core. The study of evil has never been written out in a way like it is in this novel. It truly is a classic. Also can we have a modern movie remake please?

Me And Earl And The Dying Girl – Jesse Andrews 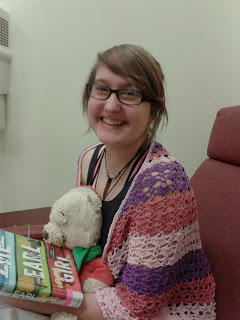 Greg and Earl just like to make movies. They make movies because it’s the only way they can survive high school. Everything is going fine up until Greg’s mom makes him befriend, Rachel; a young girl from his school who was diagnosed with cancer.

I know. Another cancer novel. “Sickness isn’t a fad!” “Can Hollywood please stop making it trendy to be dying!!1” You’ll argue. And I’ll agree. To a point. But I actually read (And finished) this novel with a needle shoved into my vain while I fought nausea from the chemo. (Shown in the picture to the right.) So hear me out first.
I thought it was funny, but not tasteless. It was honest and I always appreciate that. Overall, good read.

We Need To Talk About Kevin – Lionel Shriver
In a series of letters to her husband, Eva Khatadourian recalls the conception, birth, and life of their son, Kevin, whom she believes to have been a sociopath from birth. All of the letters lead up to one traumatizing moment that changes their world forever.

I literally cannot stress my love for this book enough. I threw this book at my wall when I finished. I cried. I sat on my kitchen floor and ran fingers through my hair. I was a mess. And the movie was just as incredible. This book deserves a full blog post review, and I always meant to do one but could never be coherent enough to do it. I can’t even talk about why I love it without giving away spoilers but it became my favorite book of all time, next to It’s Kind Of A Funny Story. The writing was just remarkable. The story was captivating and fresh. And the way it made you think just about blows your mind. 10/10 would recommend this book, although I would have to warn you it’s incredibly dark and there is some sexual content.

Orange Is The New Black – Piper Kerman
You’ve probably heard of the Netflix series by the same name. The one about the woman’s prison. You’ve probably also heard that its vulgar and sexual and just overall bad content. I would like to inform you that the book is so much better. I read this book because I liked the idea of the Netflix show, but hated the actual content. I figured I was old enough to read that kind of book, but I was happily surprised to find the book was nothing like the movie in terms of sexual scenes. Actually, I really liked it. It didn’t glorify what she did to get in prison like people argue that the show does, and it was super informative about the state of women’s prisons in the US. It made me angry at the way inmates are treated and how freaking messed up the system is. So yeah, I liked it. 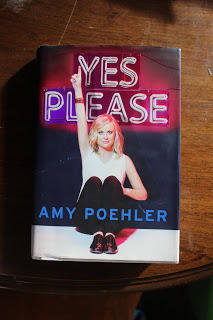 My sister made me read this book even though I had never seen anything with Amy Poehler in my life, but she knew I liked autobiographies. I read it and I loved it. I laughed, I cried. I got to highlight things I liked for the first time ever. It was cool. Dayle’s copy is going around our friend circle and each person to read it gets to write their name in the flyleaf and annotate it. It’s pretty rad. Anyhow, I started Parks And Recreation right after that and I fell in love because I had already read about how much fun Amy had making it and how hard she worked to get there. It made me appreciate it because because I could relate to how she felt. It reminded me of how I felt being a part of columbinus. And she works with people on such a huge scale that I can’t imagine how she must feel being able to put out such great shows for so many to enjoy. Plus, the book was hilarious.

My Fight/Your Fight – Ronda Rousey
Ronda has her faults. I mean, she is waaaaaaay too cocky. She’s full of herself. And the way she thinks about fighting really, I mean, it’s rough. She is one tough chick. I don’t agree with her in the sense that I believe I should be the best at what I do and should kick anyone’s butt to until I get there, but I get it in a spiritual sense. The way she fights and trains physically is how I feel I should I fight and train spiritually. If you get what I mean. Getting into fighting has been all spiritual for me. (A blog post in of itself.) It’s hard and there will be times you get knocked down and you bleed and you want to give up but instead you keep going. If you can take this book and read it in the sense that your enemy is Satan and the evil around you and you must learn how to fight, I think it will be really eye opening.

Brain On Fire – Susannah Cahalan
Susannah was a reporter for the New York Post (So she talks about Alexander Hamilton in it! Bonus!) Suddenly she starts acting psychotic. This leads to her “month of madness,” as she describes it. It was super interesting, especially noting that she has an auto-immune disease, like I have. I understood a lot of the medical jargon and procedures. Plus the psychological side really intrigued me. It was one of those books that was so well written you began to feel like you were the character in the book as you read it. So feeling like I was slightly paranoid for a few days was weird.

We All Fall Down – Nic Sheff
This personal story of addiction and relapse was powerful. Even if you’ve never struggled with substance abuse, you can relate to the endless cycle that we seem to be in; getting up, falling down, getting up, falling down. Nic Sheff is brutally honest in his journey to be free from drug abuse, and each page broke my heart and made me feel deeply for him and others in his situation. Nic is a remarkable person with a tremendous amount of strength, and his story will inspire you. I loved this book so much I went and read every single one he’s written so far; I was not disappointed. He’s a fantastic writer and his life story is just amazing.

So that’s it. I read a lot of other books but those are the ones that stuck out to me. What were your favorite books you read last year? Have you read any of the books I mentioned? If so, what did you think of them? 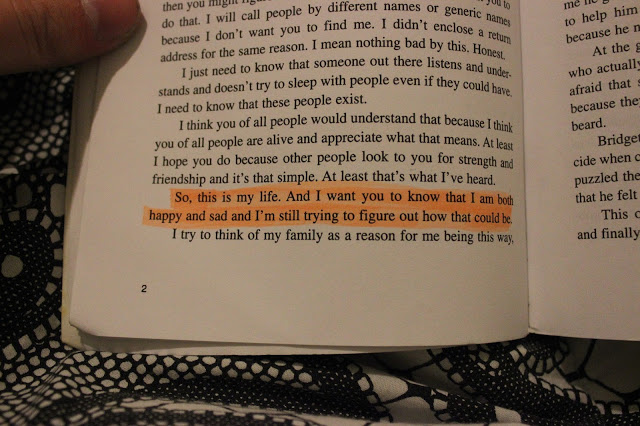 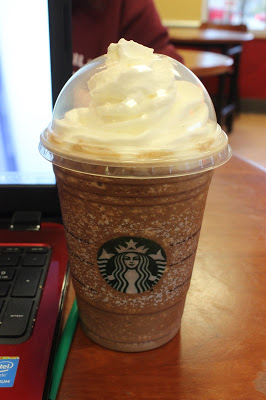